The Birth of a Character

After graduating from Bread Loaf thirty years ago, I wanted more than anything else to be able to have children and raise a family, if you will, to give birth to real life characters. But it turned out that wasn’t as easy as I anticipated. Neither is the process of giving birth to fiction characters. Everywhere, I saw babies, young children, teens, students of all ages and they weren’t mine. My husband and I couldn’t get pregnant and the turmoil that caused inside me is equivalent to the desire and difficulty of conceiving a character whose story is worth telling.

After many years and after several surgeries, I conceived, but both the baby inside me and myself were at high risk of not surviving like characters that die before they populate a story or before they’ve found an audience.

Unexpectedly, none of the expected complications arose, and our son surprised everyone by being born healthy and much stronger than a typical newborn. This element of surprise is integral in the act of creation. Characters take on a life of their own, at times following the author’s bidding, and more often controlling the unraveling of their own story. I’m sure you can anticipate where this parallel is going.

All the elements of mothering or fathering a child connect to conceiving a character in a story from nurturing and encouraging him to allowing him to develop into a complicated, contradictory being. My son, like my characters, grew out of me, but now life experiences, complications in his life, and the people he meets, shape the decisions and choices he makes and sometimes take control of him; other times he takes control and shapes his destiny.

The nuts and bolts of creating character can be found in many how-to-write fiction books. A writer has many strategies to choose from as he breathes life and purpose into his characters.
1. Physical, emotional, and psychological descriptions of characters;
2. Dialogue, monologue, thought, dialect, manner of speaking;
3. Interaction with other characters or setting;
4. Actions, gestures, and expressions;
5. Reaction to what others do, to what happens to characters, and to what characters hears and perceives;
6. Clothes characters wears, places characters inhabit, objects that define them;
7. Creation of characters’ back story to establish what events, people, circumstances from their lives trigger their motives.

The author reveals his characters through scenes and summarized events in his story. My list is merely a list, but it is worthwhile for the apprentice writer to incorporate all these strategies in combustible combinations. But, of course, a character is much more than the sum of these strategies an author uses to reveal him.
Posted by Cathy Eaton at 11:40 AM 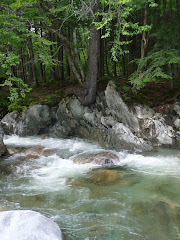